Driving on Alaska’s roads is not always a simple task. Our state’s climate provides tricky road conditions at various times of the year.

According to the National Highway Traffic Safety Administration (NHTSA), in 2016, a total of 84 people were killed in the state as a result of car accidents. Of those 84 people, 36 of them were killed due to a speeding-related car accident. That means nearly 43% of all traffic fatalities in the state in 2016 were caused by one or more drivers speeding.

In addition, speeding-related fatalities occurred most often during the evening and early morning hours, typically between 8:00-9:00 pm and 11:00 pm-2:00 am.

According to the NHTSA, from 2011 to 2015, certain vehicles were more likely to be involved in speed-related fatal accidents than others. At 27.5%, pickup trucks were the most likely to be involved in fatal accidents that were speed-related. At 25.5%, cars were next in line, followed by SUVs at 19.6%, motorcycles and ATV/snowmobiles tied at 11%, and vans tied with commercial vehicles at 2%. 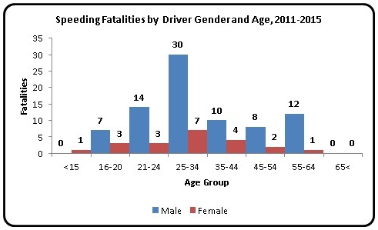 The data shows that speeding is the most deadly cause of car accidents in the state of Alaska. 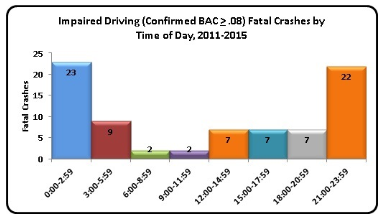 As seen in the graph above, from 2011 to 2015, alcohol-impaired driving fatalities occurred most often during the nighttime hours, from 9:00 pm to 3:00 am. 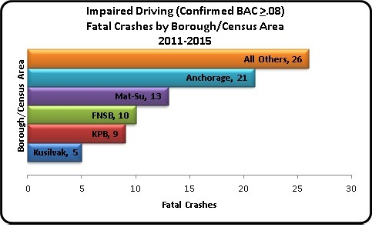 Additionally, from 2011 to 2015, the above graph shows that fatal crashes involving alcohol impairment were most prevalent in Anchorage, at 21 deaths. The next region that experienced high fatality rates as a result of alcohol-impaired driving was Matanuska-Susitna, with a total of 13 deaths.

Perhaps what is most concerning about these statistics is that both speeding and alcohol-impaired driving are preventable causes of car accidents. Next time you’re driving on Alaskan roads, remember these statistics so that you don’t become one of them.